“Give What You CAN” Kicks Off 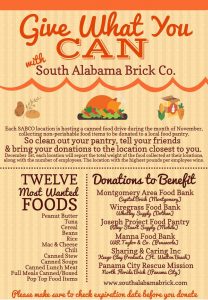 Riley-Stuart Supply has issued a challenge to all SABCO locations! As part of their community outreach, RSS collects food boxes for The Joseph Project Food Pantry that is located within blocks of their location. It is a partnership between Ashland Place Methodist Church and the Dumas Wesley Community Center.  Each year during the holiday season they ask that each employee bring non-perishable items for this food drive. Employees are asked to only provide what they feel is comfortable for their budget.

“We feel that we are truly blessed to be able to provide for our families and would like to pass those blessings along to those in the community who cannot help themselves at this time. We think this would not only help the local communities but show good fellowship among all the employees of South Alabama Brick.” said Laura Dearmon, Riley-Stuart Supply.

This year, each SABCO location will host a “Give What You CAN” food drive during the month of November. Clean out your pantries, tell your friends fill a box with canned food items to be donated to a local food pantry. December 1st, each location will report the total weight of the food collected at their locations, along with the number of employees. The location with the highest pounds per employee wins.

Stop by your local South Alabama Brick location today & help us kick-off the holiday season by giving back!

Gift giving is a wonderful, meaningful part of the Christmas experience. Unfortunately, severe poverty deprives many children in developing countries of this joy. Their parents are too poor to provide even one simple Christmas present.

Through the Box of Joy program, Riley-Stuart packed boxes filled with gifts, toys & necessities to ensure these children of Haiti are not deprived of Christmas blessings this year. By packing a Christmas gift box and sponsoring the cost of its shipment, you can deliver a Box of Joy to a child overseas who would otherwise receive nothing.

For more information on how you can help, click here.

Like many across the country, South Alabama Brick Co. employees are getting excited about football season! Locations participated in “College Colors Day” by wearing their favorite team colors. As you can see, we are a pretty diverse company, with loyalties ranging across state lines. Looks like this will, yet again, be a fun & competition fueled season! Join in the fun & follow us on Facebook, Twitter & Instagram! Click on the links below…

On December 15th, after 30 years of dedicated service, Judy Gardner retired from Riley-Stuart. Mrs. Judy served in a variety of roles over the course of her career, most recently as Front Desk Receptionist. While her optimism, positive demeanor and ever-present smile will be missed, we are happy to see Mrs. Judy realize her dream of enjoying retirement with her husband, Duck; and enjoying abundant time with her siblings, children and grandchildren.

Congratulations Mrs. Judy! We wish you the best!

“I hear tell they’ve been to the moon, but I still don’t believe it. It’s too high!”
So began a story published in the Mobile Press Newspaper, quoting then 104-year-old William Lee, in April of 1970. As noted in the article about the centenarian’s life, Mr. Lee’s father had lived to be 109 years old. Few could have imagined at the time that William Lee would go on to surpass the remarkable longevity of his father, living to be 110 years old.
One of Mr. Lee’s twelve children, Mr. Alfred Lee, celebrated his 90th Birthday on July 22nd, 2015. ‘Mr. Alfred’, as he’s affectionately known by his work family, marked the milestone occasion by doing what he loves to do: coming to work at Riley-Stuart Supply Company.
He’s been doing just that for the past 66 years, and the way he figures, “it wouldn’t make good sense to stop now”.
Mr. Alfred began working at Riley-Stuart in 1949, just in time to assist in moving the company from the original Water Street location, to its new home on Virginia Street. (Later, in 1965, Riley-Stuart would move to its current location on Western Drive.) To hear him tell it, he did more than just assist in the move- “It was me and one other guy, and that fella’ I tell you, he wouldn’t hit a lick”. Mr. Alfred has served the company in a variety of roles over the years, and thoroughly enjoys sharing memories of his long and storied career. He tells of unloading rail cars of brick by hand, a process that might take a “good several days”; and of loading those same brick onto delivery trucks, by hand of course. When asked how they unloaded the truck at jobsites, he appears understandably puzzled by the question, before answering with a hearty laugh that belies his years, “well, we didn’t have much choice other than do that by hand too”.
Perhaps it was these very “by-hand” experiences that led to Mr. Alfred’s eventual love of the forklift. But as most anyone who has spent any time at Riley-Stuart in the last half-century or so can tell you, Mr. Alfred loves his forklift. Whether working, eating lunch, taking a break, or engaged in conversation- Mr. Alfred conducts most all of his daily activities from the perfectly-worn seat of his lift. And from his beloved perch, he has inspired countless colleagues and customers with his tireless work ethic, infectious laugh and sapient advice. That he continues to do so to this day, at 90 years young, is remarkable by any measure.
But he’s not done just yet- Asked recently if retirement ever crosses his mind, Mr. Alfred shares, “No sir, maybe in a few years. Maybe then, but got no good reason to now.”

Keego Clay, our Ft. Walton Beach location, is honored to have been a part of the Building Homes for Heroes® build for Air Force Master Sergeant Joseph Deslauriers, his wife Lisa, and their son Cameron.The beautiful mortgage-free home was built from the ground up to meet the needs of MSgt. Deslauriers. He is a triple-amputee.

Founded in 2006, Building Homes for Heroes® is a national non-profit, non-partisan 501(c)(3) organization and is strongly committed to rebuilding lives and supporting the brave men and women who were injured while serving the country during the time of the wars in Iraq or Afghanistan.  The organization builds or modifies homes, and gifts them, mortgage-free, to veterans and their families. These homes not only help to remove the family’s financial burden, they help to restore the individual’s freedom, and enable the veteran to lead a more independent and productive civilian life. It’s our honor to support the men and women who have loyally and courageously served our country.

Login to South Alabama Brick Company
Reset Password
Enter the username or e-mail you used in your profile. A password reset link will be sent to you by email.